Norma Gigaba was under emotional strain after spending a night in a cell away from her children after her dramatic arrest by the Hawks at the weekend, her lawyer says.

The mother of two has since regrouped, hiring a high-level defence team, including advocates Dali Mpofu and Tembeka Ngcukaitobi, to represent her in court on charges of malicious damage to property and crimen injuria.

Speaking outside the magistrate’s court in Hatfield, Pretoria, on Monday after his client had made a brief appearance, attorney Victor Nkwashu said: “She’s a bit traumatised because of spending a winter night in custody away from her children.

“She was coughing a lot on Saturday but she is in good health.” 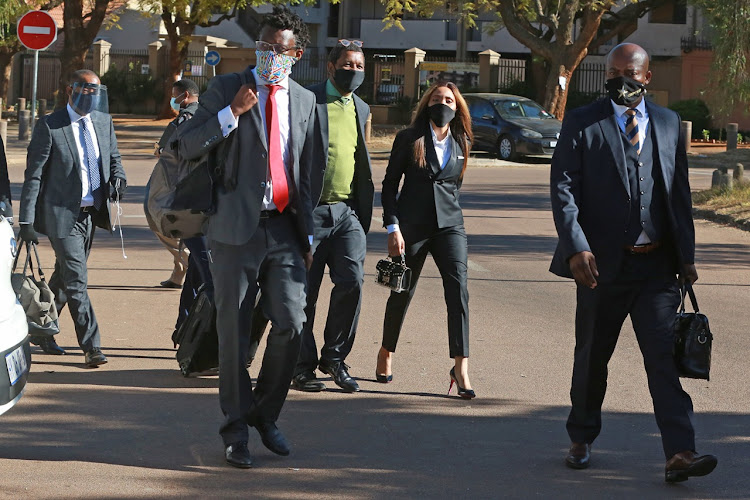 Norma Gigaba has assembled a high-level legal team to defend her on charges of malicious damage to property and crimen injuria.
Image: Thapelo Morebudi/The Sunday Times

Gigaba spent Friday night in the holding cells at Brooklyn police station in Pretoria after being arrested in the presence of her husband, former cabinet minister Malusi Gigaba, at their home in the upmarket suburb of Waterkloof.

She was released on bail of R5,000 on Saturday.

The matter dates back to July 21, when she is alleged to have caused deep scratches in a R3m black Mercedes-Benz G63 AMG “G-Wagon” lent to her husband by his close friend, trade unionist and businessman Peterson Siyaya.

The 40-year-old also allegedly trashed her husband’s study, and called Siyaya on the phone to threaten and insult him.

Magistrate Pierre Louwrens on Monday ruled that Gigaba may return to her marital home.

The court heard she had spent the weekend at a friend’s residence.

Her husband, who celebrates his 49th birthday on August 30, was not seen at court.

The case against her has been postponed to September 14.

The matter is expected to be transferred to the regional court because the amount of damage allegedly caused by her is more than R100,000.

Wearing a black pencil pants suit, paired with stilettos and blue nail varnish, Gigaba arrived at court in a black Jeep. She entered court flanked by her legal team.

Mpofu signalled he intends to bring a civil matter to challenge the validity of her arrest.

Law stopping single fathers from registering children in their name is unconstitutional: ConCourt

Law stopping single fathers from registering children in their name is...