Cele, who visited the lieutenant-colonel’s home in Bishop Lavis on Saturday, said the decision to withdraw the officer’s protection would be investigated, and “heads should roll”.

Standing outside Kinnear’s house with the detective’s widow, Nicolette, Cele said: “We had a bad time since about 3pm yesterday [when Kinnear was killed], that has taken us to wake up this morning and come here in the Western Cape.”

The minister pointed out that he had been in Cape Town earlier in the week for discussions about the growing extortion operation targeting city businesses.

“I am not going to say much but it is clear that we have lost a good man. It is not every day where you find the media saying this was the best of the best. I have read the article saying so. 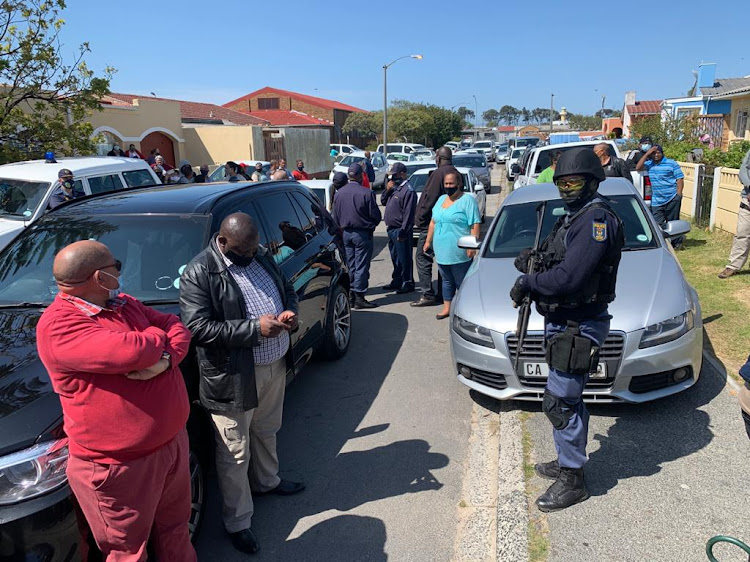 The scene outside Lt-Col Charl Kinnear’s Bishop Lavis home on September 19 2020 while police minister was inside with Kinnear’s widow, Nicolette  Image: Esa Alexander

Cele said he had spoken to President Cyril Ramaphosa about Kinnear’s killing. “From here I will go back to the president and the national commissioner,” he said.

“I must say, unfortunately at the present moment there are more questions than answers even from ourselves as the SA police.

“I wouldn’t want to speculate about matters, hence in the next 24 hours I will talk to the national police commissioner and say, ‘go down there and find out exactly what are the facts’.

“But to have those facts we need an investigation led by the national commissioner. But if needs be, there will be no problem going beyond [and] saying to the president, ‘Give us extra capacity, Mr President, to find out what has happened that has led to the loss of one of the top of the crop, one of the best investigators that we have had, one of the best detectives in the country’.”

Cele said Kinnear’s widow had told him that she does not expect her husband to be a statistic. “They want to know what happened. We are going to work on it both internally and out there,” he said.

Probed further about the withdrawal of Kinnear’s protection, Cele admitted that the detective’s life had long been under threat.

“The man had been under threat all the time, starting from the time when people were moving with hand grenades around here,” he said.

“I said at the face value, I am standing here and conceding that indeed [there] were things that were not done the way they were supposed to [have been done].

“Let’s get the facts, it should not be just a story after that. Heads will have to roll as we find what really happened.”