Scores of families were evicted on Monday from their illegal homes on the state-owned Greydell farm in the Bhongweni area near East London airport.

Despite a winter chill and a prohibition on evictions under level 3 of the lockdown in terms of the national state of disaster, officials of the sheriff of the court went ahead executing eviction and demolition notices in terms of a court order.

Tensions reached boiling point during the operation to remove the families, who had been waiting for RDP houses for years before illegally occupying the land from January 2018.

Some of the now demolished houses built at Greydell, as known as Airport Park, were reportedly worth well over R100,000.

When DispatchLIVE arrived on Monday morning, hundreds of people had gathered in the streets watching two TLBs tear down their houses, shacks and temporary structures.

DispatchLIVE has previously reported on the competing interests of all those with a stake in the Greydell land. While poor people and some “rich folks” have taken land for housing, others are concerned that the future expansion of the airport may be hampered by the illegal occupation. And environmentalists have expressed concern over the encroachment of human settlement on the flora and fauna of the Umtiza reserve. 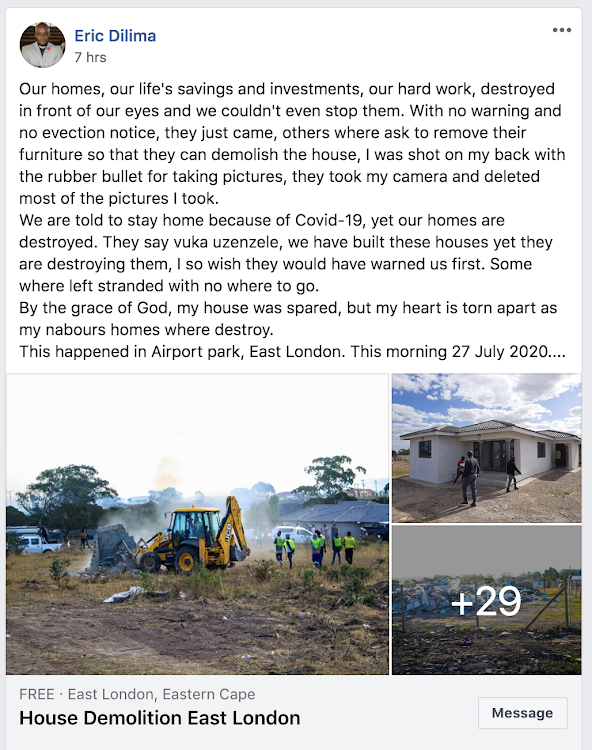 “While the sheriff of the court executed its duties, a large group of people appeared and started throwing stones at the sheriff’s personnel and the police,” Soci said.

“During the stone throwing a vehicle belonging to the survey section was hit by a stone and the rear window was broken. Rubber bullets were used to disperse the crowd. Cases of public violence and malicious damage to property have been opened for investigation.” 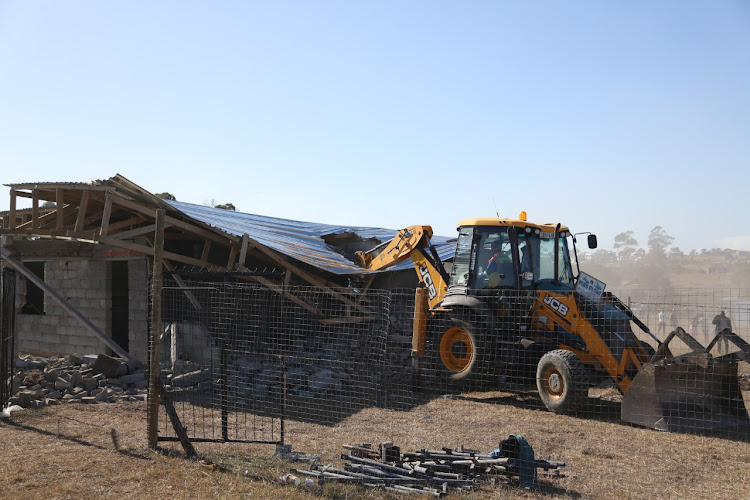 Illegal buildings being demolished at Airport Park outside East London. 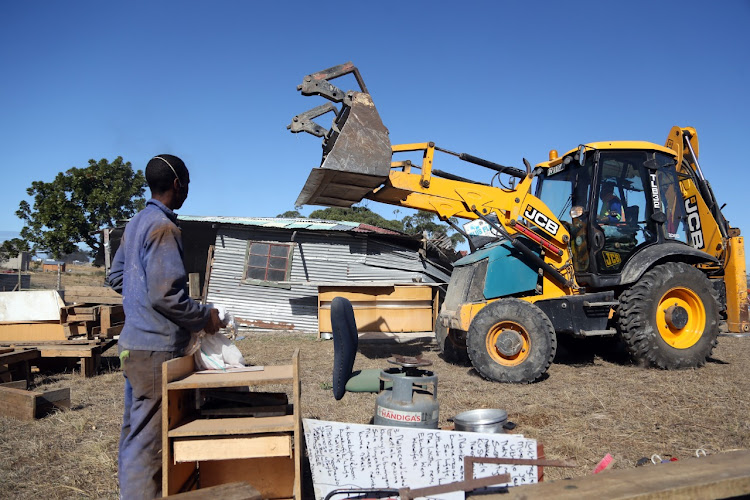 Illegal buildings being demolished at Airport Park outside East London.

Homeowner Unathi Mahleka, 39, could not hold back his tears when his R130,000 house was destroyed in front of his three daughters aged 3, 5 and 9.

“We have a committee here, and we were never informed that this was going to happen, we were told the land we were building on was safe. Right now I do not know who to blame and I don’t know who ordered the demolition, I just needed to buy the last windows and a door to finally complete my home.

Thembile Ndibaza chairs Airport Park, which is a group set up to represent residents from the community. He said the processes of allocating houses and evictions in BCM were flawed.

“A lot of the people arrived here in 1987 and have been waiting for housing promised since 1994. We have applied and written to Bhisho on numerous occasions. This land was being used for criminal activities and we decided to occupy it while waiting for government to sort things out.”

He said they were never consulted before the demolition. “We were never told anything but just saw the police and sheriff coming here to destroy our houses. When we asked what was happening we were only given a letter from the department of public works.”

Scores of residents were seen carrying their belongings out of the structures before they were demolished.

“Many families have no place to sleep. This is the sad cruelty we get from our government. We are not being taken seriously.

“The regulations were signed by the president that there should be no evictions or demolitions during lockdown. Instead of being given houses, we built them on our own and now the government comes and destroys everything.”

In a court order dated March 2017, the East London high court told the residents they should not build on the land. “The sheriff of the court, with the assistance, where required, of the SAPS, is hereby directed, authorised, and empowered to take any and all necessary and reasonable steps to dismantle and demolish any structure erected on the property in contravention of this order.”

BCM spokesperson Samkelo Ngwenya said the authorities were acting on the basis of a high court order and referred questions to public works.

“The land in question belongs to the national department of public works, so our involvement has been at operational level. We have in the past condemned and acted against any land invasion as they put strain on the resources and hinder development plans.”

East London airport manager Michael Kernekamp said the invasions had not yet affected operations at the airport. “When we look at the long-term future demand of the airport at a strategic level, when we are talking about extending runways, only if the demand is there then it might impact us but in the short term it has not affected us negatively yet,” he said. — DispatchLIVE

‘I think they stole my iPad’: Ramaphosa puzzled as gadget goes Awol