Mulaudzi and Ramalepe’s transfer was put on hold in March and they have arrived in the midst of the PWL season having been unable to travel for the start of the campaign due to the lockdown in SA.

Belarus has not gone into lockdown.

Sandwiched between Poland and Russia‚ football in the country runs from March to December to avoid the cold.

The SA duo have started brightly as Ramalepe‚ starting‚ and Mulaudzi‚ off the bench‚ made their debuts in a 7-2 second leg Women’s Cup semifinal win that sealed a 12-3 aggregate victory over Bobruichanka on Wednesday for a place in the final.

Dinamo lead the PWL‚ the winners of which reach the Champions League‚ which 30-year-old veteran forward Mulaudzi‚ who has played in Australia and Cyprus‚ and 28-year-old Ramalepe‚ in her first contract abroad‚ view as a shop window. 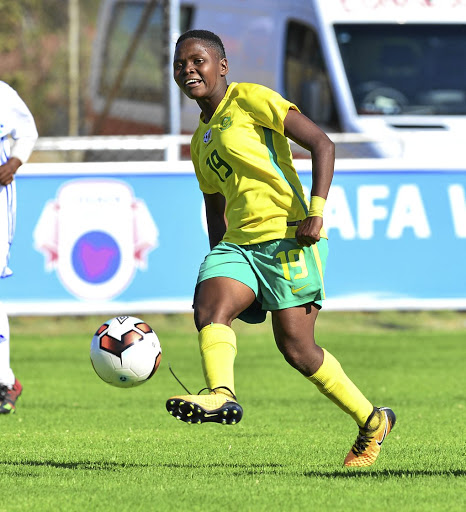 “I’m happy with the move even though it was supposed to happen earlier‚ in March‚” Mulaudzi said.

“I just have to continue from where I left off in the national league in SA [for champions Mamelodi Sundowns]‚ where I had a good season.

“Now it’s a new chapter where I have to work harder so that I can play‚ and then also be able to get offers from different teams.”

Mulaudzi and Ramalepe’s signing in Belarus followed five new contracts in a 10-day period of Banyana players in July‚ on the back of the national team’s first Fifa Women’s World Cup appearance in France in 2019.

They join a third Banyana player‚ Bambanani Mbane‚ at Dinamo.

The 30-year-old centreback beat the lockdown to travel to Belarus in February‚ and she was able to greet her national teammates at the club who top the PWL‚ challenging six-time-in-succession champions and capital city neighbours FC Minsk for the title.

“I’m overwhelmed because this move happened so fast — I didn’t think it was going to happen any time soon‚” Ramalepe said.

EFF’s ultimatum to Safa: no Bafana matches in SA unless Banyana are paid R50,000 appearance fee each

‘Not all officers are like this‚ but your silence will affect...