The mother of a 41-year-old man who allegedly committed suicide after being implicated and arrested for the murders of five women in Mtwalume, on KwaZulu-Natal’s south coast, says if her son was guilty then he deserved what he got.

The 62-year-old widow has been emotionally burdened with the accusations levelled against her son, Mduduzi Mafutha Khomo, which have left their family fearing for their lives.

TimesLIVE has decided not to name the woman over those fears.

The community of Mtwalume has been left reeling in the wake of the murders, which are believed to be the work of a serial killer.

Speaking to TimesLIVE on Wednesday, the woman said rumours had been circulating in the community that her family should be banished.

“I don’t even know what’s going on because I’ve heard rumours that people said we should be cast out of the community. If that’s the case, where are we going to go?” she said.

She said she would rather die than live with the stigma of having given birth to someone who committed such horrific crimes. “What pains me the most is that I am now left in this situation. It’s painful for me to hear what they say he did to other people’s children. It pains me as a mother.”

He deserved it. I even said to the community that my son should die so that I could be at peace with myself.

Mother of suspect in Mtwalume murders

She said she was disappointed and heartbroken when news surfaced that her son had been arrested for the murders.

TimesLIVE can reveal that Mduduzi, the main suspect in the case, was arrested shortly after 9pm on Saturday evening while on duty at the petrol station where he worked.

He was arrested in connection with the murders of Akhona Gumede, 25; Nosipho Gumede, 16; Neliswe Dube, 22; Zama Chiliza, 38; and an unidentified woman in her 20s who died sometime between April and last week.

The woman claimed he was not a troublesome child. She said he had attended Mtwalume High School, but only obtained his grade 9 certificate before dropping out to find work to support his family.

“When he got a job he came to me and said he had taken out a funeral policy for me. He said, ‘I want you to know that when I die you will get some money.’ I asked him, ‘What will kill you my son?’ He said, ‘While I’m walking to work at night, something might happen to me – I don’t know.'” 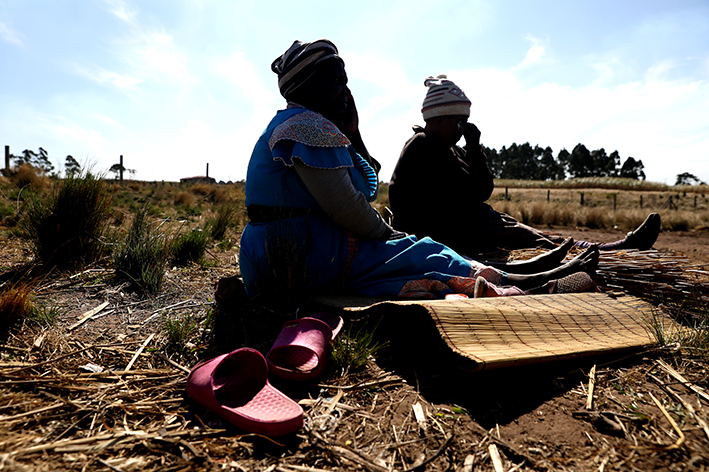 The mother of Mduduzi Mafutha Khomo and her niece outside their home in Mtwalume.
Image: Sandile Ndlovu

She said the last time she saw him was three months ago.

“He came home and gathered us around because he wanted to show us something. He was wearing his security uniform. I told him he looked beautiful in that uniform – he was looking like his father. That was the last time I saw or spoke to him,” she said.

The Independent Police Investigative Directorate (Ipid) has been tasked with investigating Khomo’s death.

TimesLIVE broke the story last month, revealing that a detective had been tasked with investigating if the murders of three women in Mtwalume were the work of a serial killer.

Law stopping single fathers from registering children in their name is unconstitutional: ConCourt

Law stopping single fathers from registering children in their name is...