A recently retrenched young professional stood in the streets of Johannesburg handing out his CV — and yes, he got the job

A young Johannesburg professional was so determined to find a new job that he stood in the street with his CV — and it worked.

Ayanda Mbatha began his new job as a project engineer at Rhochrematics in Midrand at the beginning of the month.

The 26-year-old was another victim of the destruction caused by the Covid-19 pandemic, which effected not only the health of the country, but the financial stability of many of its residents.

At the beginning of the pandemic the qualified mechanical engineer was retrenched, along with many other colleagues, when the manufacturing company he worked for took financial strain as a result of the ban on imports and exports.

But with the support of his close-knit family he decided he wasn’t going to become a statistic — one of 59% of youths unemployed in the country.

So Mbatha spruced up his CV and spent the early mornings sending messages to potential employers on business social media site LinkedIn. And spent every day at a busy street corner in Blairgowrie handing out his CV. 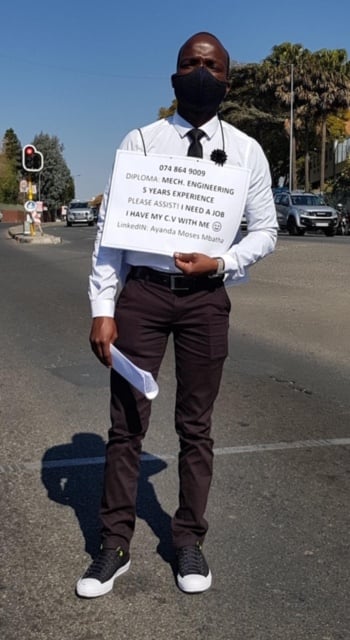 And he did it all in his best suit — because, for Mbatha, every day was an interview day.

“Some of the comments I got were vile, but I don’t mind what people say — as long as I accomplish the goal in the end. Negativity gets you nowhere and positivity gets you everywhere.

“Covid was what got [my old] company into financial difficulty — we couldn’t sell internationally. I was the youngest and the newest in my department. [Retrenchment] wasn’t easy but I was one of many people who lost a job at that time.

“When I told my family I was being retrenched they acted positively and all said, ‘don’t worry, you’ll get another job’.

“They made me get up and want to go out to look for work.

“People always make excuses as to why they are unemployed, but I am lucky I have a supportive family who encouraged me to look for, instead of wait for, work.”

Mbatha is a master at marketing himself which he says comes from his fondness of meeting people and travelling to new places. He said his new goal was to help other youngsters find work in the same way he did.

“It became easier to go to the traffic lights, [I had the attitude of:] I know this economy is straining and people are stressed, but here I am and I know what I want.”

And it all paid off. By June he was contacted almost daily, not always by companies who were employing, but because they wanted to meet him and learn more about his drive.

Then his big break came when a passing motorist took his CV and gave it to Rhochrematics — which happened to have a position available.

“I am keen to help other young people do the same — I wish other people could get the same results as me. You must be positive or be nothing.

“I wanted others to drive the conversation around my hunt for work so I specifically did not take photos of myself to put on social media. To potential employers, that may come across as desperate.

“But instead when the next potential employer drives past they see you have courage and they can interact with you and get to know your character, then they look at your CV.”

On his traffic signboard Mbatha wrote:

Please assist, I need a job, I have my CV with me

Followed by his LinkedIn profile name

One of those who spoke highly of Mbatha was singer Craig Hinds from the band Watershed and local radio veteran Darren Scott.

Scott told Mbatha’s story on the Mix FM Drive Show and, according to a recent social media post, received a lot of positive responses. Over 700 people reacted to the good news that Mbatha had a new job.

In the Facebook post Scott wrote: “Thank you to everyone who responded so positively to Ayanda’s story … and Ayanda … for being determined, humble and gracious! It just shows what can be achieved when the odds seemed stacked against you, yet you just swallow your pride, get up and get out there and make it happen!”

Mbatha was humbled by the attention but said he owed his fighting spirit to his entrepreneur mother Thulisile Ethel Mbatha, “the strongest woman ever”.

“Mom never had 9-5 job, I got my entrepreneurial skills got from her. She did everything from selling clothes then selling food, she even got into the taxi business. She could sell anything.

But the drive did not stop at Mbatha. All four of his siblings are working hard to make the family proud.

Eldest brother Thokazani, 32, is an IT professional, brother Sthembiso, 30, is also a mechanical engineer, brother Hector, 28, is a PR specialist for the City of Johannesburg, and younger sister Khanyisile Veronica, 24, recently graduated as an internal auditor and will do an internship next year.

Mbatha, who also speaks seven SA languages, said he was excited about the new chapter in his career.

“My new team has a lot of goals going forward which is very exciting for me. I’m still wrapping my head around my new job but the company has offered so much support and they have been so accepting of me.

“I still carry my [job request] board in the boot of my car — it is my inspiration.”