The ministry said that the newly recorded fatalities took the national death toll to 5,940.

The ministry’s latest figures also reveal that SA climbed closer to the 400,000 mark of Covid-19 infections, with 13,150 new cases confirmed in 24 hours.

DispatchLIVE reported on Wednesday that health minister Dr Zweli Mkhize had slated Eastern Cape officials for not releasing their death statistics on a daily basis.

Mkhize told a roomful of hospital managers from Dora Nginza, Livingstone hospital and Uitenhage Provincial hospital that there should be no more delays in releasing the figures.

“MEC, your reporting of deaths must be as they come and on a daily basis,” he told health MEC Sindiswa Gomba. “We want to know what the figures are every day.”

He added: “We know there are challenges with death reporting because there are those whose comorbidities were worsened by the virus, which resulted in their deaths.

“Others died around the period of Covid-19 and all these must be investigated, but we are saying there’s a process of tracking deaths; we still want daily reports.

“We won’t allow you to delay by a day and then another day because it creates a distortion.”

The ministry also announced on Wednesday night that there were now 229,175 recoveries – a recovery rate of 58%.

Prior to the release of Wednesday’s figures, according to worldometer, while South Africa has the fifth most cases globally, its mortality rate of 90 per 1 million of the population ranks 44th. 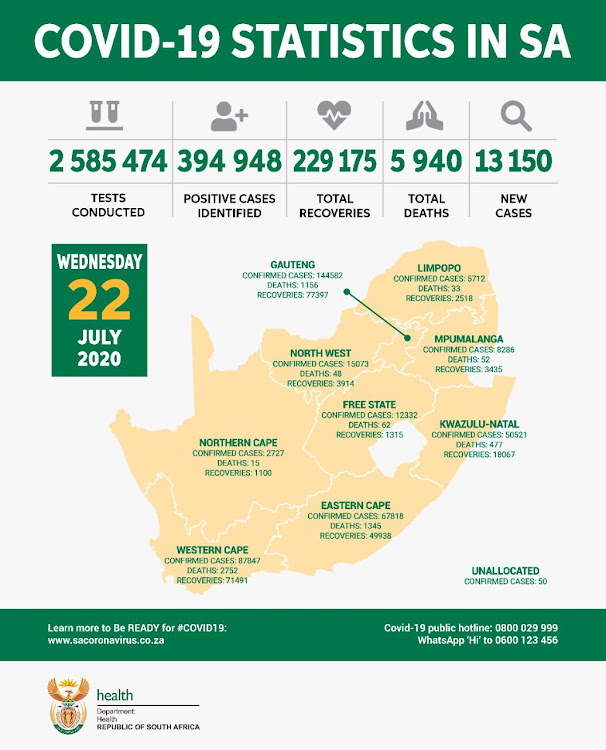 The Rep available in stores

All grants paid to public servants, except foster grants, will be...