With the Heritage weekend looming and many excited about the upcoming downtime, it is important to keep road safety top of mind.

For some, the long weekend starts on Wednesday, with most schools closing and many businesses following suit.

This week, the N3 Toll Route issued a traffic alert ahead of the weekend, stating that high traffic volumes are expected on the route.

N3 Toll Concession commercial manager Con Roux warned that long-distance journeys, especially at peak times, could place additional strain on motorists as roads become congested and delays are the order of the day.

The route connects most of the N3 gateway region, from Gauteng to Mpumalanga, the eastern and southern Free State, the uKhahlamba-Drakensberg mountain range, KwaZulu-Natal Midlands, the port of Durban and coastal towns along the Indian Ocean.

The route, according to Roux, was affected by the national state of disaster when N3TC had to temporarily suspend its major road rehabilitation and construction projects during level 5 of the Covid-19 lockdown.

He said it is still under construction and construction teams are pulling out all stops to make up for the lost time.

“Although N3TC does everything within its power to minimise traffic disruptions at peak times, road users should prepare for slow moving traffic and congestion at construction sites,” Roux warned.

Roux said lane closures and restrictions will remain in place at construction sites as the route is preparing for the December peak traffic season.

Current construction sites on the route between Heidelberg and Cedara can be expected from Villiers to Warden, Frere (R74) to Midway, on Van Reenen’s Pass, and from Mooi River to Howick.

“Isolated lane closures are predominantly in place in a southbound direction, towards Durban. However, two northbound lanes, towards Gauteng, will be open to traffic on Sunday,” said Roux.

“We strongly appeal to weekend travellers to carefully plan ahead, and to remain patient when travel conditions become demanding.”

For expected peak times, the grid below provides an overview of expected traffic volumes along the N3 Toll Route over this coming long weekend.

See the full grid below. 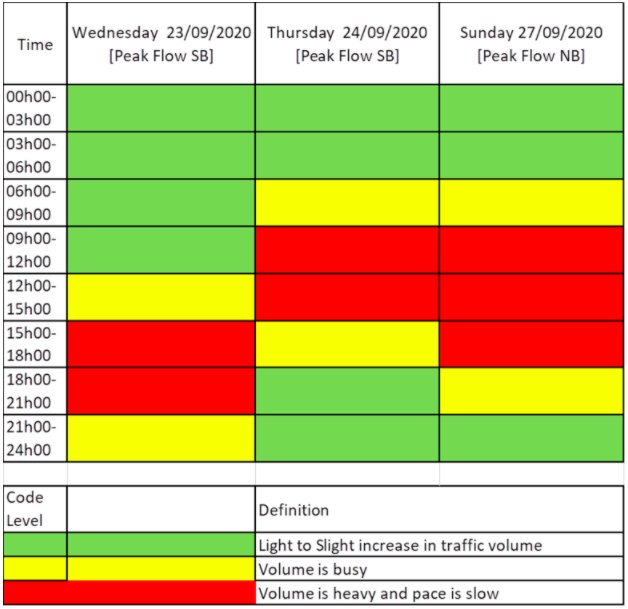 Can your employer force you to take the Covid-19 jab? Minister Thulas Nxesi clears the air

Can your employer force you to take the Covid-19 jab? Minister...

WATCH | Trevor Noah announces ‘The Daily Show’ is taking a...

Can your employer force you to take the Covid-19 jab? Minister...