The North West education department has confirmed a video shared on social media showing a parent confronting a teacher and knocking her to the ground happened at one of their schools.

“The teacher, who has more than 10 years’ teaching experience, was allegedly assaulted by a mother who has two children, in grade 4 and R, at the school. It is alleged the parent complained about why the teacher turned back her children for arriving late,” said Malindi.

“Upon investigation, the department found the two pupils never arrived at school as their names did not appear on the register on the day.”

In the 30-second video, the 53-year-old teacher is seen standing in the doorway of a classroom trying to speak to the parent, who can be heard speaking in Setswana and is waving her finger. 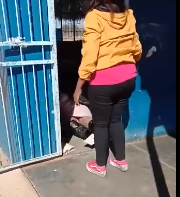 The teacher falls to the ground, inside her classroom.
Image: Screengrab

Education MEC Mmaphefo Matsemela  expressed her displeasure about the behaviour of the parent.

“On behalf of the department, I would like to strongly condemn the alleged incident against one of our teachers. I am perturbed by the incident and the actions of this specific parent. Our teachers are beacons of hope and should be treated as such for the huge revolutionary role they play in educating our society,” said Matsemela.

“As a department we plead with parents to protect teachers and not to cause any harm to  them. Teachers should be treated as a scarce commodity which needs to be protected by society.”

The department dispatched a team of psychologists to offer counselling for teachers and pupils at the school.