A concerned sugar cane farm owner on KwaZulu-Natal’s south coast is offering a R20,000 reward to anyone with concrete information about the murders of five women, three of whose bodies were found on his land.

Owner Siyabonga Gasa told TimesLIVE that he has had sleepless nights after the discovery of three female bodies on his farm in Mtwalume.

“It’s very sickening. I am angry. It’s not something that is going down well with me. I was born and bred here in Mtwalume, so if anything happens to any member of the community I am also one of them,” said Gasa.

In addition to the reward, Gasa said he would be enlisting  the help of private investigators.

The latest body found on Gasa’s property on Wednesday was that of an unidentified woman. Her half naked body was hidden in a bush near the sugar cane field that had been recently harvested.

“There was an open wound on her chest which suggests she was cut. We can’t say whether she was raped or not but the post-mortem is going to determine that,” said police spokesperson Col Thembeka Mbele at the scene.

The discovery came just 24 hours before the body believed to be that of Zama Chiliza, 38, was found in the same area on Wednesday. She was last seen on July 25, while allegedly on her way to the clinic.

“Yesterday’s body (Chiliza) was an inquest initially but later in the afternoon when the pathologist visited the scene he discovered that the woman was strangled with a  bra then we changed the case to murder,” said Mbele.

The discovery of Chiliza’s body is what ultimately led police to conduct a thorough search of the bushy area. 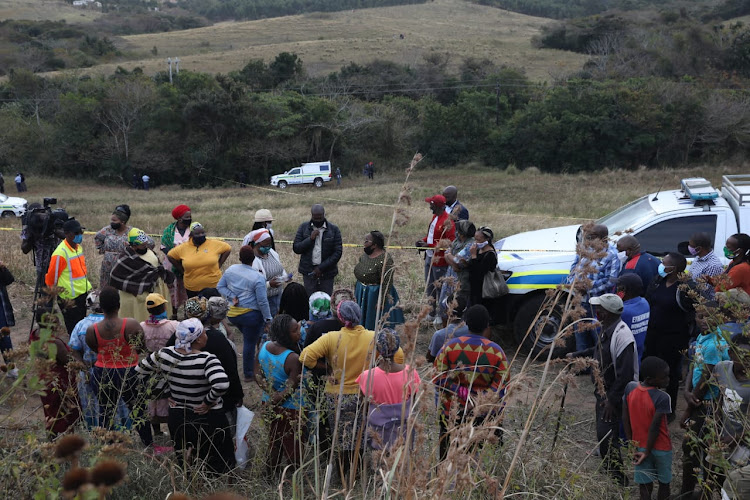 Community members gathered in a sugar cane field where the body of a fifth woman was found on Wednesday.
Image: Sandile Ndlovu

The first body to be found on Gasa’s property was that of 22-year-old Nelisiwe Dube who died as a result of a stab wound to the chest. Her body was discovered on July 6.

The mother of three was last seen on the evening of June 28. Her sister, Sthembile Dube, said she could not have walked to where she was found.

The bodies of neighbours Akhona Gumede, 25, and Nosipho Gumede, 15, were found badly decomposed in a sugar cane field not far from their homes and just a few kilometres from Gasa’s farm on April 25. At the time police said that their bodies were badly decomposed making it difficult to find a cause of death.

Their families, who are neighbours and share a surname, say the pair were last seen on March 28 and did not say where they were going.

“There is a team that has been formed and is made up of different detectives and a pathologist. They are investigating an inquest on the first case where two bodies were found (Akhona and Nosipho), a murder on the second body (Dube),” said Mbele

“We cannot rule out a serial killer but the evidence that we have now does not suggest a serial killer. But we are trying to investigate all the angles to find a modus operandi of these killings,” said Mbele.

As fear spread through the community, police have urged them to be vigilant.

Eating on board domestic flights is now forbidden

Parliament to decide on inquiry into Mkhwebane’s fitness to hold office...